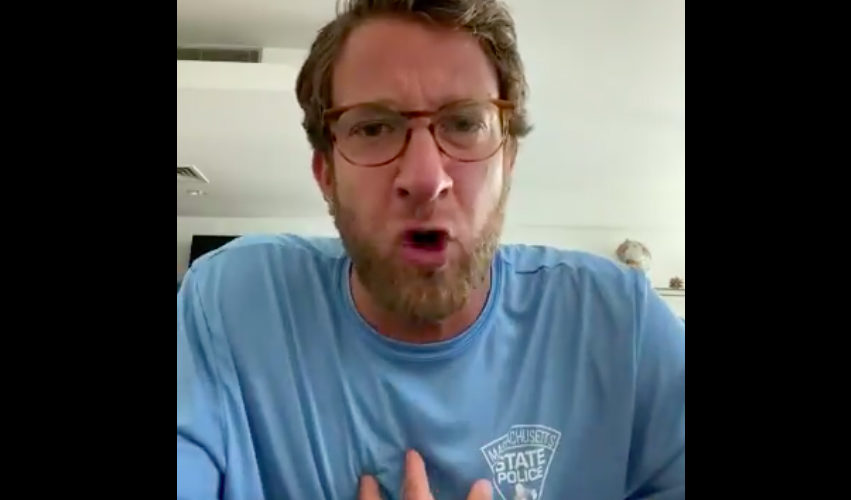 Several days ago, Dave Portnoy—an internet personality and the founder of a popular sports blog called Barstool Sports—released a three-minute video in which he vigorously ranted against the ongoing lockdowns.  Portnoy’s basic point was that the goalposts have shifted from flatten the curve to find a cure, and he pointed out, in blunt and colorful language, that economic suicide in pursuit of the latter goal is pure insanity. His video went viral. Portnoy is not a political figure.  His anger over the current economic crisis and his sense that, having done our best to slow the spread, we have the right to take a risk to survive, resonates with a lot of normal people. One of Portnoy’s repeated questions throughout the video was, when did this happen? When did we go from flattening the curve to tanking our economy, our livelihoods, and our futures? When indeed.

Last night on Tucker Carlson, Andrew Napolitano offered a related reflection when he described a free state as “one where the laws are written to uphold personal liberties,” while the definition of a police state is “one where the laws are written, legitimately or not, to uphold what the government wants.”  He went on to note that there has been a transition in America that has not been gradual: “In a period of six weeks we have gone from a free state . . . to a police state.”

Alarming as it is, Napolitano is right. While COVID is an obviously serious and frightening virus, our leaders (and many fellow Americans, too) seem oblivious to the destruction we are self-inflicting on our economy and on millions of American lives.  The bureaucrats and local would-be dictators concocting their various plans to protect us all from each other have to be relieved of their power or the police state will be permanent.  So how did we get here, and how do we reclaim our liberty and the right to take risk to survive?

We got here because, as a nation, we agreed to the lockdowns in the first place. In late March and early April, as the virus was spreading in densely populated American cities and horror stories were pouring out of Lombardy, Italy, the mood among Americans shifted. Lockdowns started in coastal states where the threat felt most immediate, and all but swept the nation shortly thereafter.  The lockdowns happened, though, because the national mood, as intangible as that sounds, favored the lockdowns.  Politicians knew that they could call on their emergency powers and impose the restrictions because they knew they would not meet resistance. Collectively, we consented.

Do not underestimate the power of a national mood. Wars have been won and lost based not on the military might of a nation so much as the will of its people to either prevail or to fold. Nowhere is the spirit of a people more a force to be reckoned with than in America where freedom and individual autonomy are part of our DNA.  This invisible force is a very real influence in politics, and many constitutional abuses have never been attempted over the years, not because they were unconstitutional, but because politicians and leaders understood the actions would not be tolerated. In some sense, we are free because we choose to be free.

We did consent to the lockdowns and now are suffering under the insanity that has flowed from them—economic suicide and petty local laws that serve no purpose other than to nanny us into submission. So how do we muscle out of our bind?  How do we return from the police state we have become to the land of liberty that we enjoyed a mere three months ago?

One answer is certainly that we must enforce our constitutional rights by challenging the myriad overreaches in court. That is a critically important effort and just the type of pushback I have applauded for many weeks now. But, in tandem to that effort, and really prior to it, we have to shift the mood again.

Not everyone seething about the ongoing abuses by local potentates is going to file a lawsuit, but everyone can contribute to a shift in the national mood. When people honestly express to others their opposition to continued lockdowns, the sentiment spreads and the “mood” strengthens. Portnoy’s video went viral not just because he is a popular guy; it went viral because it gave voice to people who weren’t sure their gut reactions were “acceptable” and to people who felt encouraged by seeing someone with whom they identified step up and voice opposition. We all need to step up and speak out. Everyone has a zone of influence, large or small, and when you speak, you add to a critical growing momentum.

At the end of the day, we lose freedom because we let bad people take it from us.  Freedom is not taken by force only; it is often taken slowly and quietly, with our foolish consent that is given by silence.

America was not founded to be a police or nanny state; it flourished because it was the land of the free and the home of the brave. It grew to greatness because people were willing to take risks to survive and succeed. The will of the American people is not just a political platitude—it is a tangible and powerful force for freedom when properly activated. If we want to roll back the abuses—if we want to break the police state and reclaim our livelihoods, our futures, and our political autonomy—we all have to affirmatively contribute to a new national mood.

May 15, 2020
The Fifth Circuit’s OSHA Vaccine Mandate Stay + A Wrinkle

May 15, 2020
The Federalist/Pretending COVID Is An Emergency Is Killing America

May 15, 2020
My Statement on the Conclusion of the Flynn Case & Why I Will Be Stepping Back From Politics for a Time

May 15, 2020
The Federalist/There Is No Going Back To ‘Normal’ After Trump; The Republican Party is Changed Forever