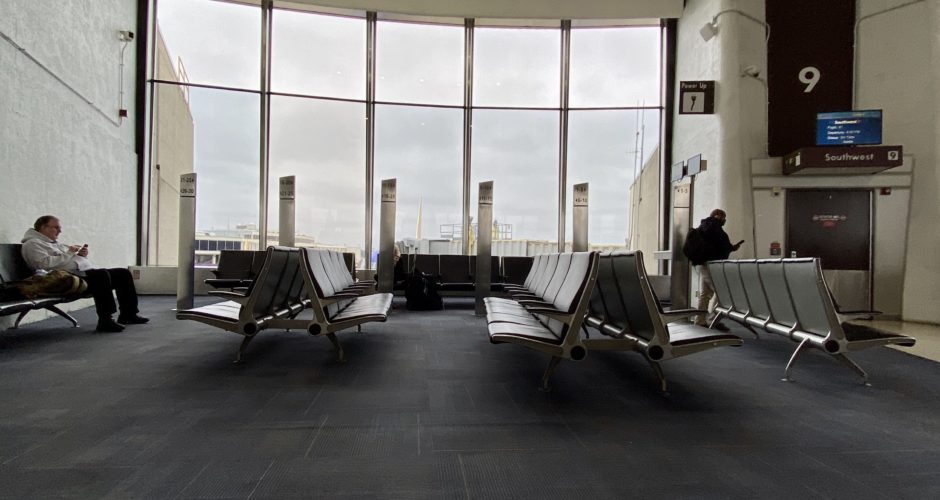 The predominant fear of 9/11 stemmed from our sudden and violent realization of national vulnerability. America was supposed to be an untouchable safe zone despite the unpredictability of the rest of the world, yet suddenly we were brutally wounded and wondering where the next blow would fall. America was on her knees, confused and hurting, facing an aggressive (and to the average American) unknown enemy.

Yesterday, I flew from Washington, D.C. to Saint Louis, Missouri.  When my plane took off, it raced up the runway at Reagan National past cluster after cluster of empty jetways.  As we lifted up over the bridge and the Pentagon, 395 stretched out below with only a trickle of cars—at  3:30pm on a Saturday. Even from 30,000 feet, I could see major highways across the country were all but bare. I had the same ominous foreboding and sense of fear that permeated the country on 9/11 and in the strange days that followed.

We all fear this pandemic. But for many of us, our fear is not simply the invisible virus, it is the deafening silence of the American economy and the internal and external repercussions that might flow from a shutdown if it extends too long.

The internal threat is that a prolonged shutdown could ultimately wipe out the middle class and fundamentally alter our national DNA.  The middle class—wealth producers—is central to America’s stability and longevity.  This shutdown has a tipping point, a point at which small business will no longer be able to hold out. Wherever the tipping point is, if we reach it and tip, it is not overly dramatic to say that the life of the nation is on the line.  I remember looking up into the cloudless sky on September 11th and wondering how many years it would be before we got back to normal. What it took me many years to realize was that life would never ever be the same again. We can’t let this pandemic prove to be a similarly negative inflection point.

The external threat is China.  We are a nation at war. The virus has brought us to our knees, and like 9/11, we are weak and wondering if our adversary will hit us while we are down, or capitalize on our stumble with catastrophic success.  These are very real and very chilling fears.

The positive news is that Donald Trump is our President in this time of crisis, in this time of war.  We could not have found a President better equipped to handle this emergency, because Trump has proven commitment and expertise in the three critical areas needed to navigate the trade-offs we have to evaluate—he truly values American life, he understands the American economy, and he understands we are at war with China.

Trump is both empathetic and patriotic, which means he will do everything in his power to protect the health and lives of American citizens from this virus. Already he has taken decisive action to encourage lifesaving treatments and produce critical medical equipment. He has the obvious covered.

Less obvious, but perhaps more critically, he also has shown a special expertise in the economy.  His first term pays tribute to his ability to create a robust economy.  I take a lot of comfort in the knowledge that Trump understands how vital the American middle class is to our national character and our freedom, and that he knows just how far he can push this shutdown before the middle class folds.  He must know he cannot push small business past the breaking point.

Finally, Trump understands China’s agenda and has not shrunk from engaging in the new Cold War China has waged against us. In the past three years, his strong stance on tariffs weaponized our economy against the CCP and other dangerous regimes that have sought to wreak havoc on America and take American lives. He will have an eye to those threats as he plots his pandemic strategy.

The key is to understand that our national lockdown is not without consequences.  Fear of illness (and I fear the coronavirus) can blind us to other dangers that could rival that of a pandemic.  Reinvigorating the economy (which is certainly more complicated than simply reopening the economy, but also certainly starts there) is critical. No one should be ashamed to worry and wonder about dangers posed by a nation at stand-still, and no one should be criticized for demanding our leaders and our press engage with those concerns, too, despite the sickness that surrounds us.

March 29, 2020
The Federalist/Pretending COVID Is An Emergency Is Killing America

March 29, 2020
My Statement on the Conclusion of the Flynn Case & Why I Will Be Stepping Back From Politics for a Time